The Tales of the Croquant 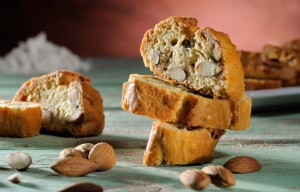 You can find almonds in many traditional confectionery of the South of France, such as the Tourons, the Nougats or the Dragées (sugared almonds). It’s the Romans that brought the almond tree to us.  It disappeared somewhat, too fragile to resist the spring frosts. But in the past ten years, with the pulling out of many vines, it has again found its place in the scrubland where its early, white flowers announce each year the end of winter. What joy it is to find the first blooming almond tree, sign that the cold will be soon replaced by the warm sunshine of the South of France!

At home, our speciality is the Croquant! Its origins date back from the Renaissance: it was then called the “croquet”, and the old recipe of this dry biscuit was based on ginger bread. In the pure Mediterranean tradition, it is a recipe that is passed on from one generation to the other from here to Italy: in our region only, it will look different should you be in the Catalan area; the Gard or Mende…Remains the almond, as a whole in the dough or sprinkled on top. At grandma’s we prefer them whole.We make a shortbread, long and thin, just like a baguette. Half way through cooking, we take it out to slice it, then back in the oven until the biscuit becomes very hard and very crunchy. However, in our family, we have a secret recipe. Our dough stays supple and therefore more crumbly but still as deliciously crunchy. So as would grandma say: “we take care of our teeth”.

Imust admit, “I’m a little greedy one”, as would grandma say with a knowing smile…and, of course, I love chocolate. I think that’s why grandma put dark and strong chocolate chips in the recipe instead of the almonds one day. How can I explain the sensation of biting in such a crunchy biscuit whit the chocolate chips simply melting on your tongue? … a biscuit of pure contradiction! And sometimes, I even come back from school and dip it in a mug of hot milk. It makes it all soft on the outside, crunchy on the inside…and best of all, my milk turns all chocolaty! Delicious!