The Tale of the Mantecao 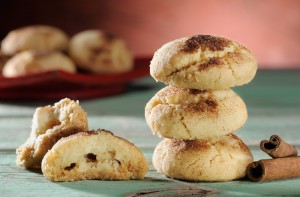 You’re gonna laugh, but I learned only a short while ago, that the recipe we use at home to make the Mantecao is close to the one of the Ghribia, not as well-known but of the same basic recipe. ”What’s the difference?” I hear you say… The Mantecao has its origins in a biscuit called Mantecado, shortbread flavoured with cinnamon and/or lemon. One of its ingredients is lard because at its creation, in the XVIth century, cereals and lard were in abundance in this Spanish county. The Muslims took the recipe and replaced the lard with peanut oil. Finally, nowadays, even in Spain, this recipe is made with peanut oil under the name of Mantecado or Mantecao throughout the Catalan area. It is good to remember that at the beginning, the Catalogne belonged to Charlemagne, King of the Francs. And, despite a common wish for independence, French and Spanish fought for centuries for the control of this area until it was divided at the French-Spanish border.

You see, cooking is like a journey when you try to find the origins of the recipes, a journey through the history of the Mediterranean… I’ve always found this fascinating and I hope that you too, are enjoying this little trip in my company!