The tale of the Oreillette 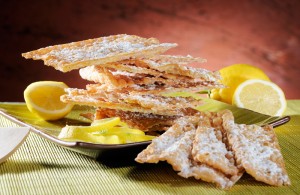 I can’t wait for Shrove Tuesday and the Carnival! In my princess Mél’s costume, I’m gonna be in the middle of the float during the big parade. We play fun games. It’s also the time when I make loads of Oreillettes with grandma and we invite all my friends. Yum, so crispy, so delicious!! With that little sprinkle of sugar at the end, there are some for every taste…me, I like the icing sugar, it looks like snow!!!

One day I asked grandma why they were called “Oreillettes”, it’s a funny name, no?

She said:” you see, this recipe goes back a long, long way: you have to go back to the XIVth century when they were called “Orillectes”. There are two theories, says M. Esparcel, renowned confectioner in Montpellier:  some say that it was created by the olive oil manufacturers in order to taste their oil; others link it to the wine fests where it was the family dessert by excellence. To explain the name, there are also two theories. Me, I first knew the Oreillette when it was round, we didn’t use a rolling pin like today, we used to sit on the floor, with a cloth on our knees and stretch the dough until it became very thin and formed little circles, which we fried in the heavy pan above the log fire. Once cooked, they looked like our ears! The other, more amusing, explanation is that long ago, they used to put the dough to stand under their pillows (Oreillers in French!). Anyway, the Oreillettes has many names, even just in the south of France it can be known as the Merveilles or Bunyetes. It also appears in different shapes from the Poitou-charentes to Italy, where the arrival of spring and the tradition of Carnival brighten villages and bring generations together.